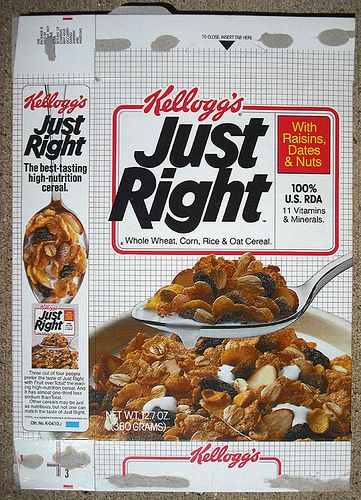 Kellogg’s Just Right cereal was introduced in the USA in 1985. My mom bought a box and I remember us trying this, only getting a few bites in until we had to dump the rest of our bowls into the trash. It was nasty.

My peers in high school had the same opinion and we called it Just Sucks. The cereal was basically a fruitcake in a box. It had bran flakes, corn flakes, dates, raisins, almond bits and oats and pretty much targeted at the yuppie bunch.

This cereal had a massive ubiquitous TV advertising campaign for it (perhaps the largest I had ever seen for a cereal) and discount offers that moms of that time couldn’t resist. But everyone under the age of 30 hated this commercial as much as the cereal because it was guaranteed to pop up at least 4 times an hour during day… Read More